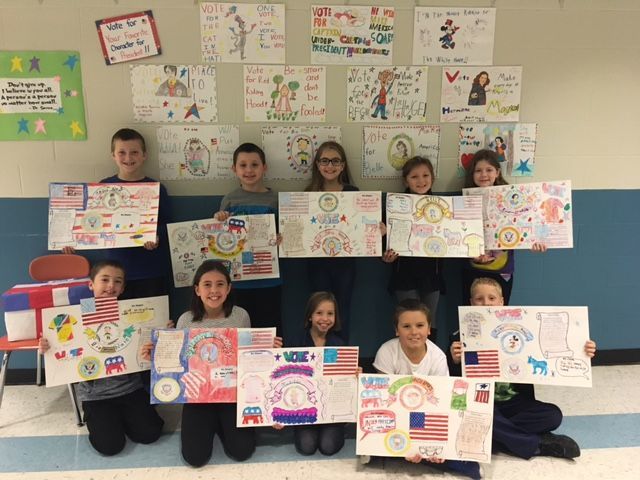 The students in Cheryl Pulaski’s four-grade ELA enrichment class completed a project to coincide with this year’s presidential elections. After completing several lessons on character traits, students were asked to choose one of their favorite characters from a novel or picture book that they felt had the best traits to be a successful president. The characters included Matilda, The Cat in the Hat, Snow White, Belle, Nate the Great, Harry Potter, Hermione Granger, Red Riding Hood, The BFG, and Captain Underpants. Posters were created showcasing their characters with campaign t-shirt designs, slogans, and portraits. Each student also wrote an Oath of Office speech to read at the conclusion of the election. They created a catchy slogan and designed campaign posters that were displayed in the hallways. The students wanted to find a way to get the whole school involved, so they invited all the other classes to view their posters, vote for a character, and place their ballots in student-made ballot boxes. When the voting ended, students counted up the ballots and Harry Potter was our winner! The kids really enjoyed this project and learned a lot about presidential campaigns and the election process.